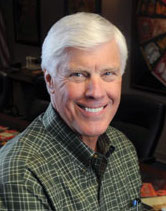 Bill Battle played college football at Alabama for Coach Bryant from 1960-62. Coach Bryant called Battle, “the most underrated player in America.” He was a leader on the 1961 National Championship team. After serving as an assistant at Oklahoma, West Point and Tennessee, Bill was appointed the head coach at Tennessee from 1970 until 1976. During that time his Volunteers won the Sugar Bowl, the Bluebonnet Bowl and two Liberty Bowls. His record was 59-22-2.