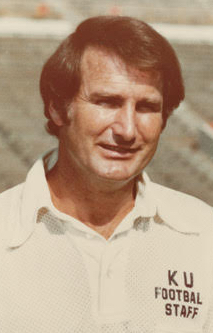 Bud Moore played collegiately at the University of Alabama in both football and baseball. After his college career, he had coaching stints at Alabama, Kentucky, Texas A&M and North Carolina. In 1975, he became Head Coach at the University of Kansas and was named Big Eight Coach of the Year by the AP and UPI after taking the Jayhawks to a 7-5 record. He was named District Six Coach of the Year by the American Football Coaches Association. In 1996 he was named recipient of the Paul W. Bryant Alumni-Athlete Award.