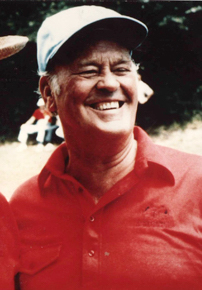 Charley Boswell, the world’s most renowned blind golfer, won 16 national and 11 international blind golf championships during his career. He had never played golf prior to his loss of vision on November 30, 1944 in Germany, as an infantry captain in World War II. Prior to military service, he was an outstanding football and baseball player at the University of Alabama. For fifteen years, he served as Founder and General Chairman of the Charley Boswell Celebrity Golf Classic which raised over one million dollars for the Eye Foundation Hospital of Birmingham. Over the span of his golf career, Charley hit three holes-in-one. Bob Hope called Charley Boswell “America’s greatest inspiration.”