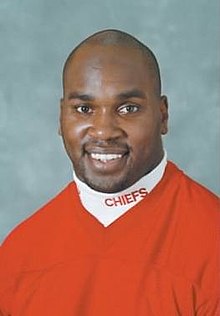 Thomas played collegiately at the University of Alabama. In 1988, he was named a unanimous All-American, a Lombardi Award finalist, and a Butkus Award winner. The fourth overall draft choice by the Kansas City Chiefs in 1989, he went on to lead the NFL in sacks in 1990 and earn Defensive Rookie of the Year honors. He reached the 50-sack plateau faster than any linebacker in the NFL (54 games) and was named the Chiefs’ Most Valuable Player in 1991 and 1994. He received the NFL’s two most prestigious Humanitarian Awards, the 1993 NFL Man of the Year Award and the 1995 Byron “Whizzer” White Humanitarian Award. He is a member of the NFL 1990s All-Decade Team and the Chiefs 40th Anniversary All-Time Team. A nine-time Pro Bowler, his No. 58 was retired by the Chiefs in 2009.