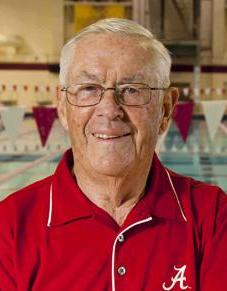 In 1973, he took over the University of Alabama swimming program. By 1977, he had taken the Crimson Tide to the NCAA Championships, finishing runner-up. His men’s team won the SEC Championship in 1982 and 1987 while the women’s team won in 1985. In his 18 years at Alabama, Coach Gambril compiled 237 victories and 32 losses. Twice named National Swimming Coach of the Year, he was the head coach of the U.S. swimming team for the 1984 Olympics and the 1990 Goodwill Games. Gambril received the USA Swimming Award in 1983, the highest award USA Swimming bestows, and was inducted into the International Swimming Hall of Fame.