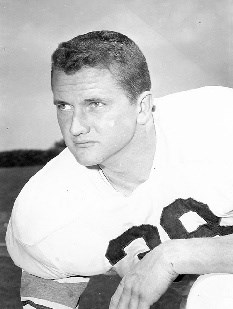 Dyas was a three-year starter at fullback on Auburn teams that won 24 games in three years, beginning with the undefeated 1959 team. He was named All-American in 1960 when his field goals provided the margin of victory in four of Auburn’s eight wins. In 1959, Dyas set NCAA and SEC records for field goals in a season – 13 in 1960, and for career field goals, 17. In three seasons at Auburn, he made 70.8 percent of field goals he attempted. Dyas also led the Tigers in rushing and scoring in 1960, and was selected as the SEC’s most outstanding back and made Academic All-SEC in 1958, 1959 and 1960. He became the first Auburn player, and only second in the SEC, to be named the Football Foundation Scholar-Athlete in 1960. Dyas turned down pro offers to attend medical school.