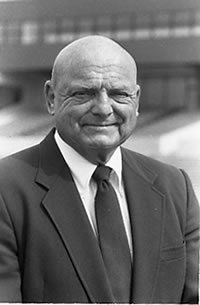 Erk Russell grew up playing football in Ensley Park and later at Ensley High School. At the collegiate level, Russell was a four-sport letterman at Auburn University. After starting his coaching career at Grady High School in Atlanta, he went on to serve as assistant coach at Auburn and Vanderbilt before joining Coach Vince Dooley’s staff at Georgia in 1964. It was at Georgia that he became famous for creating the Junkyard Dog defense which led Georgia to a national championship in 1981. Later that year, Russell was hired to build a football program at Georgia Southern University. He produced three national championship teams at GSU and was runner-up on two other occasions.