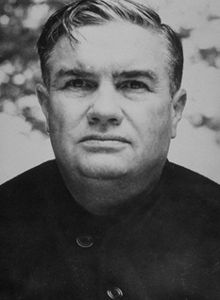 After two years at Western State College, Frank Thomas transferred to the University of Notre Dame where he played quarterback for Knute Rockne from 1920 to 1922. He was roommates with George “The Gipper” Gipp while at Notre Dame. Thomas coached at Georgia and Chattanooga, before accepting the head coach position at the University of Alabama in 1931. When he retired in 1946, Coach Thomas had led the Crimson Tide to four undefeated seasons, three Rose Bowls, one Sugar Bowl, one Cotton Bowl, and one Orange Bowl. The only team to play in all four recognized bowls in those days and in consecutive years. His record was 115-24-7 and he led the Crimson Tide to two National Championships. He was elected to the College Football Hall of Fame in 1952.