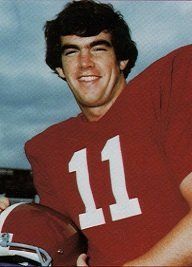 Rutledge played collegiately at the University of Alabama. He was the starting quarterback for Alabama’s National Championship team in 1978. He is third on the list of most consecutive passes without an interception (100). He is tied for third with most touchdown passes in a game, and in a season. He is tied for second in career touchdown passes. He is fourth in career touchdowns passing and running (30 passing, 11 rushing). He played fourteen seasons in the NFL with three different teams. He played in a Super Bowl with each of those teams: L.A. Rams, New York Giants, and the Washington Redskins. Since retiring, he has coached high school, college, and professionally.