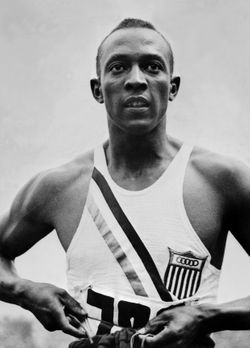 Jesse Owens attended high school in Cleveland, Ohio and garnered national attention when he set the world record in the 100-yard dash, the 220-yard dash, and the long jump as a high school athlete. He attended Ohio State University where – in the span of 45 minutes at the 1935 Big Ten Meet – he set three new world records in the long jump, 220-yard sprint, and 220-yard low hurdles; he tied the world record for the 110-yard dash as well. Owens made history at the 1936 Olympics in Berlin when he won the Gold Medal in four events – the 100-meter sprint, 200-meter sprint, 4×100-meter relay, and long jump. He received numerous awards throughout his life including the Presidential Medal of Freedom and the Silver Olympic Order. USA Track & Field and the Big Ten Conference both created annual athlete of the year awards in his honor.