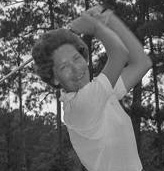 Growing up in Roebuck, she became one of the state’s outstanding amateur golfers. She was twice a medalist and three-times a runner-up in the state amateur, winning the championship in 1954. She joined the LPGA tour in 1957, playing regularly for 24 years. She captured one of the LPGA’s major championships, the Dinah Shore, and won five other tournaments in her professional career. The Birmingham native, along with former LPGA pro Beth Stone, owns and operates The Golf Shop, a full-service merchandising, club-fitting, and instruction facility in Tucson, Arizona.