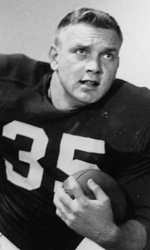 Joe Childress was considered the finest fullback in the country during his junior and senior seasons at Auburn. Childress led the Southeastern Conference in rushing and scoring his junior year of 1954, and was named Back of the Year in the SEC. He was the Most Valuable Player in the Gator Bowl, where he gained 135 yards on 20 carries. In his senior year, Childress was Auburn’s rushing leader with 1,677 yards. He was also the SEC’s premier linebacker in those years. The two-time All-American was drafted by the Chicago Cardinals. He had many successful years with the Cardinals in Chicago and then in St. Louis.