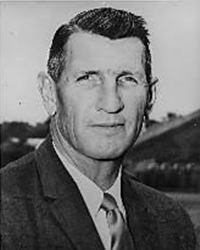 John “Hurri” Cain started his football career as an All-State player at Sydney Lanier High School. He attended the University of Alabama where he was a three-time All-American from 1930-1932. A triple-threat fullback, he was a member of the 1930 National Championship team that went undefeated and won the Rose Bowl. Following his time at Alabama, he was the head football coach of Southwestern Louisiana Institute (Louisiana-Lafayette) from 1937-1941 and athletic director from 1946-1947. He was also a member of the University of Mississippi athletics staff from 1947-1972. Cain was honored as an All-Time All-American at Alabama and inducted into the College Football Hall of Fame in 1973.