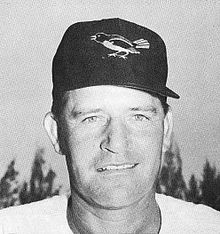 Harris spent 33 years in professional baseball as a player, coach, and manager. His career began in 1936 when he signed with the Atlanta Crackers. He moved to the major leagues in 1941 as a pitcher with Connie Mack’s Philadelphia Athletics whom he played for until 1946. His last year as a player was 1947 with the Washington Senators. He coached for many years on Paul Richards’ staff in Chicago, Baltimore, and Houston. In 1961, he became the manager of the Baltimore Orioles. He managed Houston in 1964 and 1965, and during this time, his Astros played the New York Yankees in the first MLB game ever played indoors, at the Astrodome. From 1968 to 1972, he managed the Atlanta Braves, and in 1969 guided the Braves to the National League West Division Title.