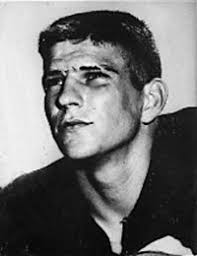 In 1961, Pat Trammell was chosen as an All-American quarterback at the University of Alabama and led Alabama to their sixth National Championship and Coach Paul “Bear” Bryant’s first. During the 1961 season, he became the first player for the Crimson Tide to pass for more that 1,000 yards, throwing only two interceptions. He played in the Liberty, Bluebonnet and Sugar Bowl games. Dr. Trammell earned his M.D. from the Medical College of Alabama in 1966, but tragically lost his battle with cancer at age 28 on December 10, 1968.