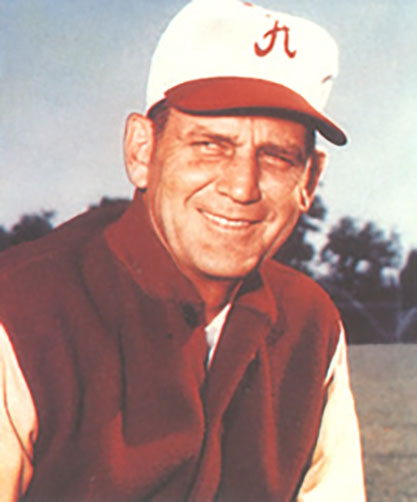 Paul “Bear” Bryant, who earned the nickname “Bear” after wrestling a live bear as a boy, played football at the University of Alabama from 1933-1935. He played end across from Don Hutson and was a member of the 1934 National Championship team. After college, he coached at Vanderbilt, Maryland, Kentucky, and Texas A&M before returning to his alma mater in 1958 as head coach. Over the next 24 years, his teams won six National Championships and he was named National Coach of the Year three times and SEC Coach of the Year eight times. Except for his first year, the Crimson Tide went to a bowl game every year that Bryant was head coach. He finished his career with 323 victories and was inducted into the College Football Hall of Fame in 1986.