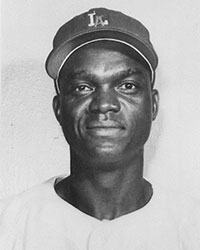 One of the state’s all-time best athletes, he played both professional baseball and basketball. One of the most versatile players in baseball history, he could play any position expertly, as well as run, and hit with power and average. A real star in the Negro Leagues, he was finally signed by the Boston Red Sox. He later managed the Birmingham Black Barons and became a mentor to superstar Willie Mays. Davis also played for several years with the Harlem Globetrotters basketball team.