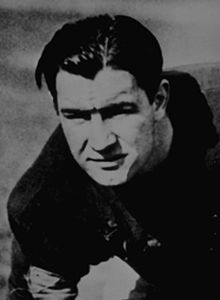 “Papa Pooley” was a tackle and back at the University of Alabama from 1922-1925. In 1924, Alabama secured their first conference title with Hubert at quarterback. He was the quarterback in the 1926 Rose Bowl Game, leading Alabama to its first ever bowl victory and national title. He was named to numerous All-American teams as a quarterback and as a fullback. After college, he coached basketball and football at the University of Southern Mississippi and at VMI from 1937-1947. He then pursued a career in business, settling in Waynesboro, Georgia to grow peaches. Hubert was inducted into the College Football Hall of Fame in 1964.