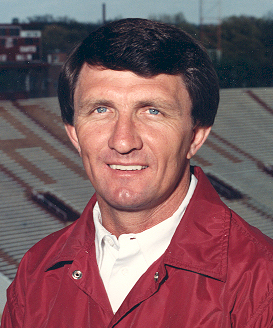 From 1964-66 he was a wide receiver at the University of Alabama. During this time, Alabama compiled a 30-2-1 record, including two national championships and three SEC titles. As a senior, he was team captain, SEC Player of the Year, and All-American. He played in two Orange Bowls and one Sugar Bowl, and set records in both. He was drafted by the Baltimore Colts and played five years there. He played in Super Bowl III in 1969 and Super Bowl V in 1971 when the Colts were Super Bowl champions. In 1979, he was named head coach of the New York Giants. In 1983, he returned to the University of Alabama as head coach and coached there until 1986. He was later head coach of the Tampa Bay Buccaneers and Arkansas State University. He has also coached for the Patriots, Browns, and Raiders.