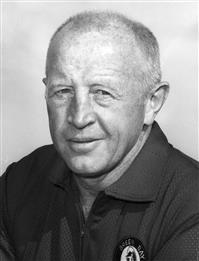 Red Cochran played football at Wake Forest as a tailback. His college career was interrupted by World War II where he served in the Army Air Corps. He was drafted by the Chicago Cardinals of the NFL as a defensive back and punt returner. He played on the Cardinals NFL Championship team in 1947 and on the runner-up team in 1948. He was either a player, coach or scouted for teams in 10 NFL Championship games, and won seven championships. He had coaching stints at Detroit, Green Bay, St. Louis, San Diego, and then back to Green Bay. He was a member of Vince Lombardi’s staff during Green Bay’s glory years with four NFL titles and a runner-up, plus the Super Bowl I Championship in 1966. In 1997, he was inducted into the Green Bay Packers Hall of Fame.