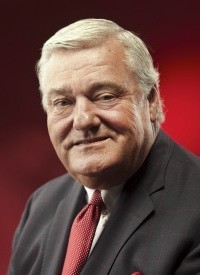 Sim Byrd played quarterback at Troy State (now Troy University) and led the team to the NAIA National Championship in 1968. That same season he led the NAIA in passing yards (3,042), completed 221 of 350 passes for 30 touchdowns and had a completion percentage of .643. He also led the nation in punting average with 45.4 yards per punt. He was a consensus First Team All-American in his division. For his career he threw for 7,092 yards, completed 536 of 860 passes for a pass completion percentage of .623, and threw for 68 touchdowns. He was named captain of the 1967 and 1968 squads and was selected Most Valuable Player of both the semi-final and championship games in 1968. He was the first Troy football player to participate in the Blue-Gray All-Star Classic. In 2005 he was inducted into the NAIA Hall of Fame.