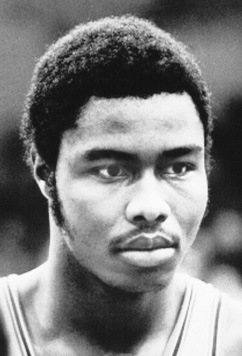 Travis Grant played basketball at Kentucky State University. He holds the all-time/all-division scoring record in NCAA basketball history with 4,045 points. His senior year he averaged 39.5 points per game. He led Kentucky State to three consecutive NAIA National Championships. He was presented the NAIA Chuck Taylor Most Valuable Player Award twice. He was the first small college player to win the Lapchick Trophy-Sporting News College Basketball Player of the Year award in 1972. He was the 13th overall pick in the 1972 NBA Draft by the Los Angeles Lakers He played one season with the Lakers; and the next three years in the ABA. His career field goal percentage was 53.6% making 934 of 1,743 shots. During 1974-1975, he averaged 25.2 points per game and was the second leading scorer in the ABA. He was inducted into the College Basketball Hall of Fame in 2009 and the NAIA Hall of Fame in 2011.